Now that spring is here and the weather is warming up, there are plenty of options for exploring the city. Guided tours, whether by bus or on foot, are popular among Québec City visitors. The city and the surrounding region certainly have a lot to offer. Lovers of nature and the outdoors can have their fill, and of course history and heritage buffs go crazy about the Old Québec historic district, which is listed as a UNESCO World Heritage site. Anyone feel like a walk?

The first tourism in Québec City 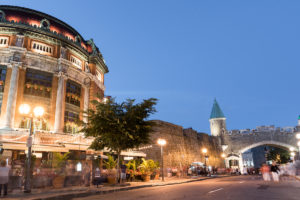 Québec City has been a sought-after destination for centuries. Even before there was tourism, visitors enjoyed stays here to soak up the city’s part-European, part-North American ambiance. The fortifications certainly give the city a romantic air. During a stay in 1842, Charles Dickens was so fascinated with the stunning beauty of Cap Diamant that he dubbed Québec City “America’s Gibraltar.”

It wasn’t until the second half of the 19th century that tourists really began flocking to the Old Capital. Better transportation methods, including a new railway and streetcar, along with the construction of tourism infrastructure, promenades, luxury hotels, and restaurants helped spur this trend. Big passenger steamships began making stopovers in the port. Illustrated travel guides extolled the picturesque beauty of Québec City and its main attractions. The city was an international sensation!

The first guided tours date back to the early 1900s, when carriage drivers began offering narrated rides through the streets of Old Québec. Over the following decades the city organized, improved, and refined its tourist offerings to the wide selection available today. We hope the following tips will help you take full advantage of them!

Ideas for exploring the city

We have a wealth of options when it comes to guided tours! Choose from walking tours to bus routes to horse-drawn carriages. 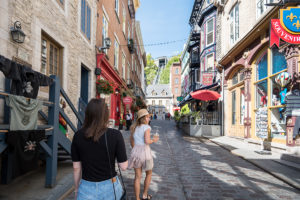 A score of guided walking tours are available in Québec City starting in May. Some of these tours are even offered all year long.

Foodies love tours that add tastings to the mix. Broue-Tours include visits of three microbreweries and nine tastes of beer along with snacks (also available as a bike tour). History fans will fall for Cicérone Tours, led by guides in New France–era attire, or Mendel Tours, offered by a professional historian who loves his city. You can also delve into the city’s more mysterious and disturbing secrets in one of the candlelight tours offered by Ghost Tours of Québec .

If you’re more of a go-your-own-way type, you’re sure to like the mobile app from Les Sentiers du Vieux-Québec, which generates custom itineraries based on your likes, abilities, and available time. 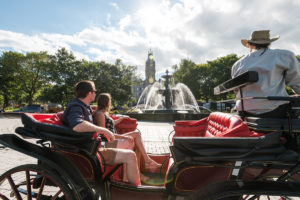 Tours of Québec City by horse-drawn carriage are a charming reminder of the city’s rich past. Because the horses are treated with all the care and respect they deserve, the service may sometimes be canceled if weather conditions in summer or winter become too taxing for the animals.

Calèches du Vieux-Québec offers tours from 9 a.m. to midnight year round, with options lasting 40, 80, or 120-minutes. They’ll even come pick you up at the hotel! For bigger groups as well as couples and families, Calèches Québec features a horse-drawn trolley.

There are lots of options for luxury bus tours, which take you right up to Québec City’s top historic sites: the National Assembly, the Plains of Abraham, the city walls, Château Frontenac, the Cathedral, Place Royale, the Citadelle and much more. Itineraries that combine “town and country” include excursions to Côte-de-Beaupré, Île d’Orléans, Sainte-Anne-de-Beaupré Shrine, and of course the breathtaking Montmorency Falls.

Like so many urban destinations around the world, Québec City has its own hop-on, hop-off double-decker buses which make visiting—and shopping!—a breeze. There is a stop a 90-second walk from Hôtel Château Laurier Québec. A variety of options are available, including a line that takes you to the Huron-Wendat village of Wendake. If you want to sit on the open upper deck (kids love it!), plan to wear sunblock and maybe even a hat. The double-decker bus runs April to October. During high season buses leave every 20‑30 minutes between 8:30 a.m. and 4:00 p.m. If you are staying longer and want to take full advantage of the bus’s offerings, look for the two-day package that includes 18 stops and a free guided cruise, so you can tailor your itineraries to your interests.

The St. Lawrence Estuary is an ecosystem unlike any other in the world, where beluga and rorqual whales can be spotted. The Bus-Whale Express package is just the ticket for families and nature lovers hoping to witness the whales in action. The luxury bus follows Chemin du Roy through picturesque villages like Baie-Saint-Paul and Pointe-au-Pic, all the way to Baie Sainte-Catherine, then a naturalist leads the group on a three-hour excursion aboard a boat specially designed for watching marine mammals. The bus leaves at 9 a.m. from Place d’Armes and returns around 8 p.m., with a shuttle service back to Hôtel Château Laurier Québec. This package is available from late May to late October.

You can always ask your Hôtel Château Laurier Québec concierges any questions you may have, or tell them what you’re looking to do. Our team will be delighted to share their advice, book your guided tours, and help you plan your visit around the city if you like. Have a wonderful stay in Québec City!