This is the time of year when Québec City—like all major Western cities—is be adorned with green, covered in clovers, and pulsing to the beat of an Irish jig!

Here are some suggestions to help you make the most of St. Patrick’s celebrations during your stay. But first, we’d love to tell you more about the Irish community in Québec City!

Although French is the most widely spoken language in Québec City, not all the city’s residents have French roots—a large part of the population also has Irish ancestry.

In the 19th century, countless ships full of Irish immigrants fleeing famine set sail for North America. Some 600,000 Irish immigrants landed in Québec City. While most made their way to Montreal or the U.S., many of them settled here, integrating peaceably with the city’s inhabitants. By 1861, Irish residents even made up the majority of the population in certain areas of town, such as Sillery.

Irish immigrants played a key role in the development of Québec City. Their descendants opened stores; became involved in unions, the press, and politics; started professional practices; and distinguished themselves in sport. They were particularly known for being skilled horse breeders.

We owe a debt of thanks to an Irishman for the fact that the famous fortifications around Québec City are still standing! During his time as Governor General of Canada from 1872 to 1878, Lord Dufferin—whose real name was Frederick Temple Blackwood—intervened to stop the old city gates and walls from being demolished because others felt they were standing in the way of progress. Thankfully Lord Dufferin saw their value! 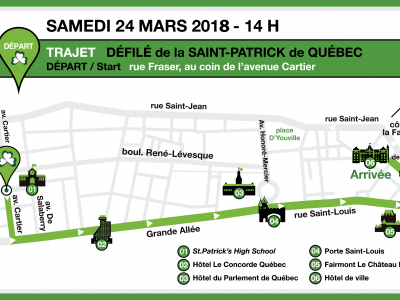 Irish culture is alive and well in Québec City.

To celebrate the green isle of Erin (Ireland’s old Celtic name), head to one of the city’s Irish pubs for a pint of beer and some speciality fare, such as Irish stew. Live Celtic folk bands will have you tapping your feet all night to jigs and reels.

While you’re exploring the city, don’t forget to stop by Artillery Park to admire the large Celtic cross. This 14-metre-high blue limestone cross proudly commemorates Québec City’s Irish heritage. Ask our Concierge to show you where it is on a map.

The highlight of the festivities is of course the St. Patrick’s Day Parade, now in its 9th year! Around 1,000 participants wear bright green scarves, hats, and glasses and parade through town, attracting about 50,000 spectators every year.

The very first parade in honour of the patron saint of Ireland took place in Québec City in 1837. The parade was held every year, almost without interruption, until 1926. In 2010, after an 84-year hiatus, the Québec City St. Patrick’s Day parade came marching back.

The parade will take place on Saturday, March 24, 2018, at 2 p.m. It’s held a week after the official date, so that many of the participating groups have the opportunity to parade in their home cities first. Several famous drum and bagpipe bands will liven up the festivities, such as the Pipes & Drums of the Emerald Society of the New York City Police Department, as well as Celtic dance troupes, circus performers, historical interpreters, and even a leprechaun or two!

Tourist season hasn’t started yet, but all this immersion in Irish culture might make you want to take a trip to Grosse-Île during your next stay in the region. Grosse-Île is part of the Isle-aux-Grues archipelago and was used as a quarantine station for many years, particularly during the height of Irish immigration. Tens of thousands of immigrants passed through the island.

Parks Canada now manages the site and offers guided tours of the lazaret (quarantine station), the Irish cemetery, the 15-metre-high Celtic cross, and the memorial. It’s about a 50-minute drive from Quebec City to fetch to the ferry to the island.